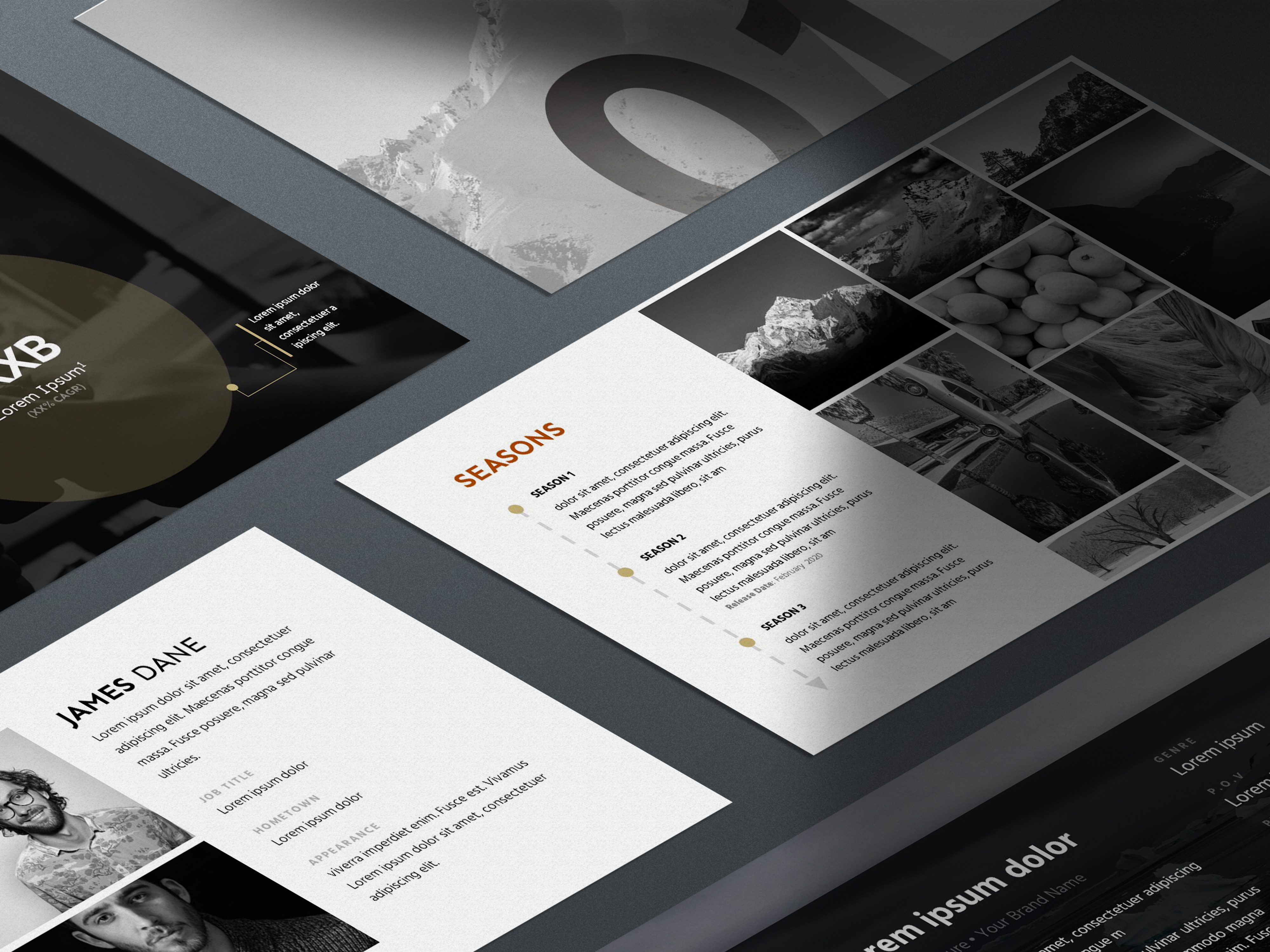 How to Create a Screenplay Pitch Deck

The  film & TV industry is flourishing everyday, driven to new heights by the growth of streaming and VOD (video on-demand) services. That said, no new film or TV show is possible without a pitch and financing. Today, the officials, agents, producers, and executives in the industry suggest having a screenplay Pitch Deck that they can see before reading the script or even considering their interest in a particular project. In this article, we will discuss what a screenplay pitch deck should cover and its purpose in the film industry; let’s take a closer look:

What is a Screenplay Pitch Deck?

It doesn’t matter you’re creating a short film, web series, TV show, or feature film; if you’re a scriptwriter or director, you’re going to need a screenplay pitch deck. A screenplay pitch deck is a valuable tool to verbally sell your script to studio executives, producers, or anyone else within the industry. Moreover, it is a visual supplement to your screenplay that explains why and how you are making this film. The screenplay pitch deck lets you delve into the specifics of overall style, visual impact, tone of the film casting, location, crew, and more.

What does a screenplay pitch deck do?

While a screenplay pitch deck can take many forms, a standard film pitch deck is set up as a series of slides (usually shared in PDF format, see below).

Tip: Provide stakeholders with a PDF of your pitch deck ahead of the meeting. Sharing it via Google Docs, Dropbox, or another online service is one additional step for them to take, and you want things to be as simple as possible. Any other file formats or special software may appear distorted, giving the wrong first impression of your idea.

There are specific design elements and narrative principles that are highly active in evoking a positive response from your audience. Since the age of script synopses and in-person meetings in the 90s, the norm has changed to virtual pitches and multimedia pitch decks in the present era. Today, the three main elements of the pitch have replaced what was once discussed during in-person meetings in Hollywood. Here they are:

Industry insiders would ask for a synopsis if they liked your logline. A synopsis that interests them would usually then lead to them requesting treatment. Once you send a treatment, you’re one step closer to making your dream movie. 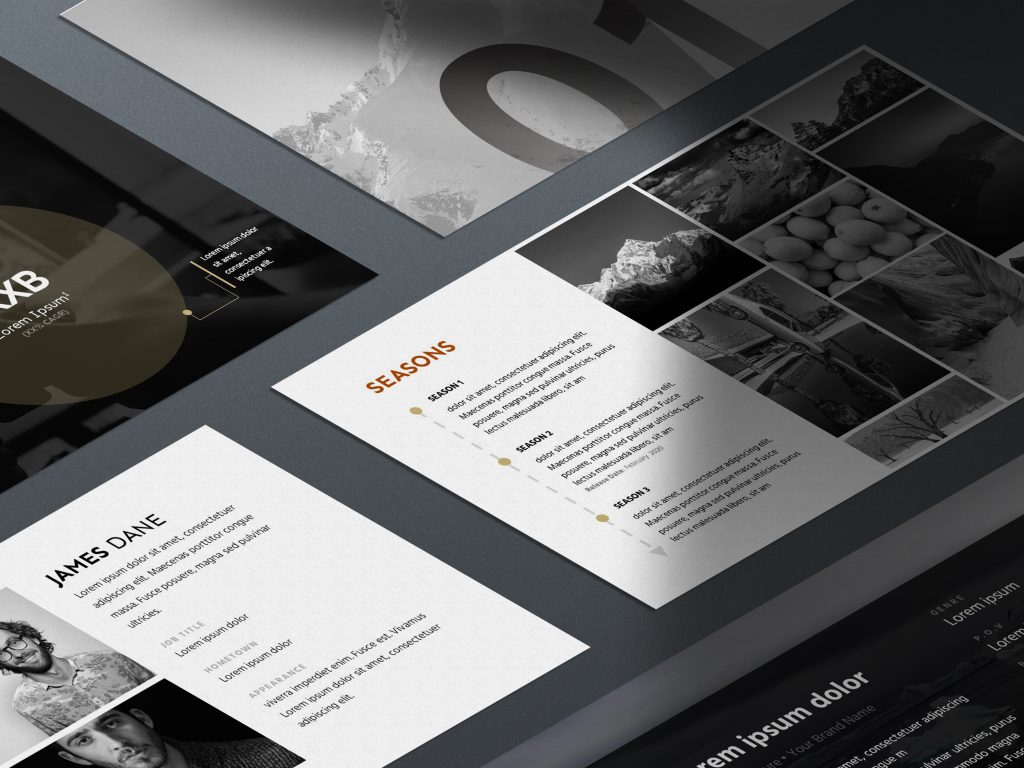 What slides should you include in your screenplay pitch deck?

There are nine sections in most successful screenplay pitch decks, as follows:

Your pitch’s title page is a poster or compelling visual that conveys the tone and ambiance of your screenplay or film. Usually, most screenplay decks simply choose to adapt the poster art to the standard 16:9 aspect ratio for a slide presentation. Contact information can also be shared on the title page if needed.

The executive summary or general introduction presents a short overview of a film, including the title, logline, style, and theme. Discuss key details such as your target audience, genre, & format.

Present a complete list of the project’s chief team members including their bios, experience, and roles. If you are planning to use the pitch deck to sell a screenplay, you can include yourself, co-writers, if any, development executives, and producers. If you want to sell a film project, the pitch deck includes directors, writers, producers, and protagonists.

This section breaks down into logline, lead protagonist’s background, his role, present conflicts and synopsis of the story. Often, this is broken into multiple slides: starting with a logline and/or synopsis, followed by the details of the setting, conflict, and opening.

Describe the protagonist, antagonists, and secondary characters. You can briefly explain their motivations or notable traits that make these characters compelling for the audience. Usually the most important 3 – 5 characters will merit their own full slides, with the rest listed alongside a brief description on one slide.

This section contains detailed summaries and descriptions of each episode or a scene. If it is a feature film or web series, you can summarize the happenings, incidents, character roles, etc., in each scene or episode. Usually, you’ll want to provide a deeper dive into the first season, with high-level details for the later productions.

A detailed summary of the target audience, location, and production schedule is delivered here. Be sure to include demographics & interests (both quantitative and qualitative data), as well as trends that favor your success. Moreover, you can also include unique elements of the filmmaking or storyline that may support your chances of successful reception among broader audiences.

Use this section to showcase your project’s genre and audience demographics for marketing purposes. Also, you can add the names and details of the potential distributors or marketing channels for the project — this is the perfect place to highlight the names of any notable studios or partners you may be in discussions with.

9. Investment & Use of Funds Slide

The most crucial factor is the financial section that shows the overall budget of the project. You can break down the financial details required for each phase of the project. If you have the research, you can even incorporate key Box Office metrics by presenting the genre’s budget and box office numbers of comparable films.

How to create a screenplay pitch Deck:

The screenplay pitch deck is a crucial tool for filmmakers who want to secure capital and commitments from investors & partners. You might be interested in the popular Film & TV Screenplay Pitch Deck Template designed by our team at VIP.graphics: cutting-edge slides based on decks that closed millions in the entertainment industry. Creating a professional screenplay pitch deck takes just a few minutes of copy & paste in PowerPoint or Keynote with this template — check it out here. 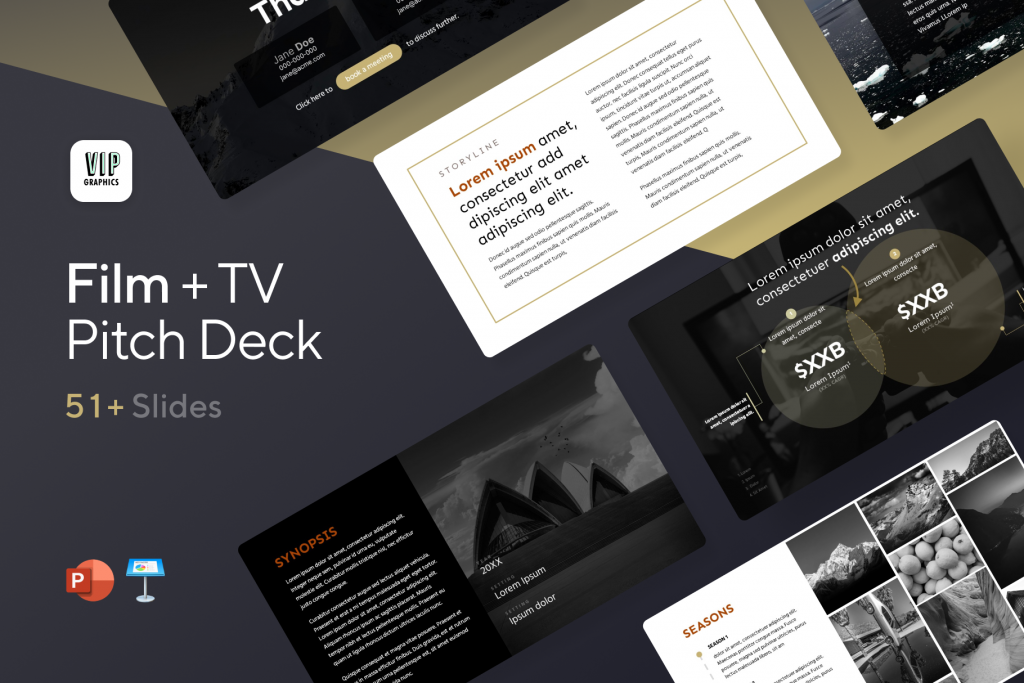