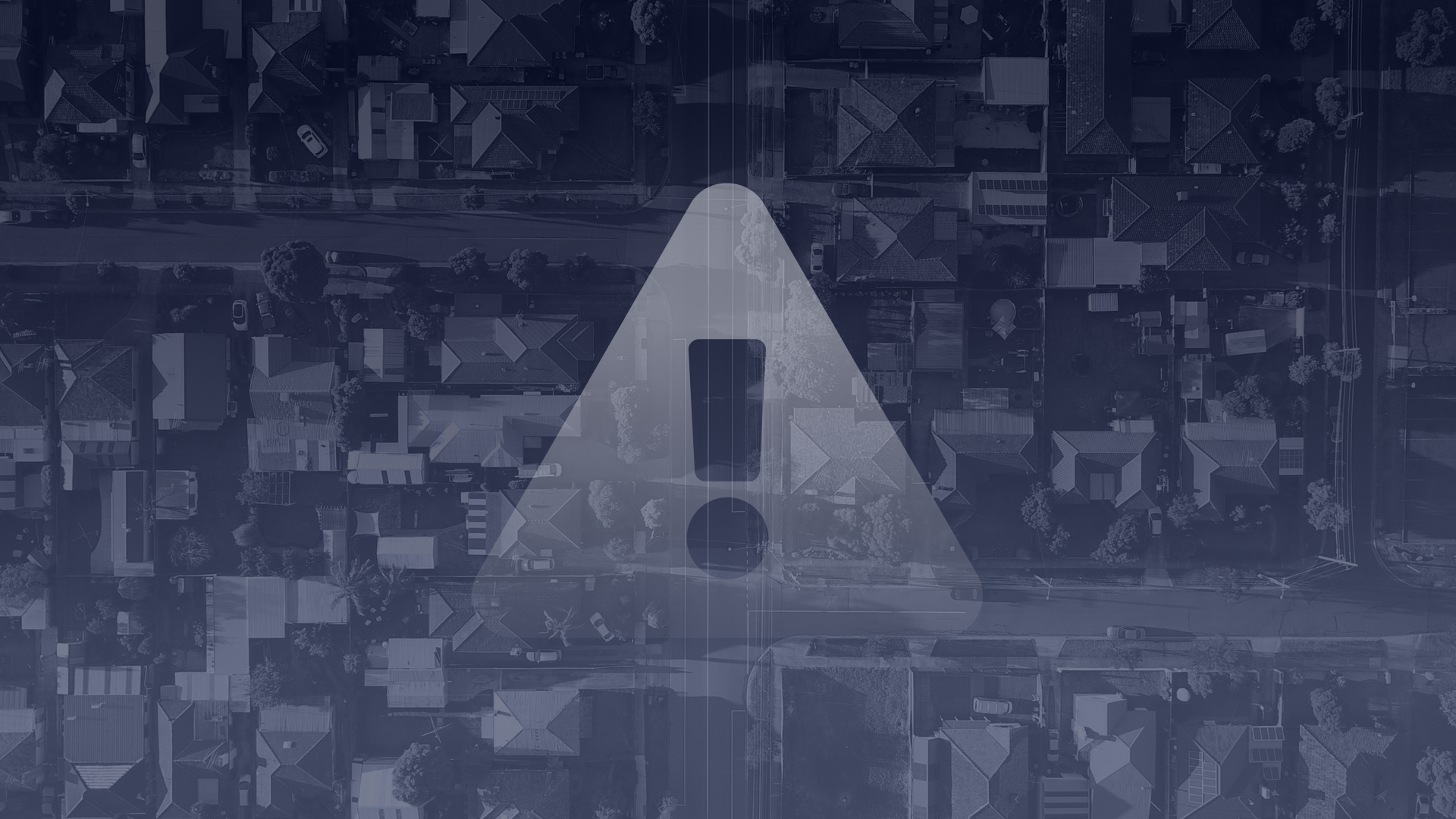 Why did Zillow have to stop buying houses?

Zillow stopped buying homes for the rest of 2021 just before November, citing a “labor- and supply-constrained economy.” The announcement from Zillow Offers on Sunday Oct 17, 2021 preceded a precipitous 11% drop in the stock, coming after a year of especially high media scrutiny into the performance of the company’s iBuying arm. The abrupt news of the homebuying stoppage has fueled increased speculation that the Zillow algorithm may have overbid on home prices, now facing losses.

In this article, we took a closer look at the numbers: specifically, several of the homes that Zillow purchased and owns + the origin story of Zillow & iBuying overall (if you want, you can skip straight to the key findings).

What is an instant home buyer?

An iBuyer is a real estate company that uses technology to make an offer on your home instantly. Based on transaction volume in 2019, the largest iBuyer companies are Opendoor, Zillow, and Offerpad.

Although OpenDoor claims to have invented the term, many local and regional real estate firms have operated with “low-tech” versions of the same business model for decades. However, this “Big 3” group of iBuyers (OpenDoor, Zillow, and Offerpad) are the first to secure the footprint & funding to drive national transaction volumes.

When did Zillow start buying houses?

When Zillow went public, their business model revolved primarily around online ads (and it still does): in 2019, they earned $1.3 billion in revenue from online advertising (~6% of the total online real estate ads market).

However, the advent of iBuying was a perceived threat to Zillow’s spot as the #1 choice for homebuyers & sellers, so (in an extremely rare move for a public company), Zillow CEO Rich Barton chose to pivot:

Zillow is losing money on homes around the nation:

To best understand the Zillow quandary, we looked into some of the houses they own around the US. When examined, a striking pattern begins to emerge across a wide variety of geographies: from Florida & Georgia to Arizona, Zillow is losing money on home sales. In fact, an Insider study reported that in Zillow’s 5 key markets, 64% of their homes (616 of 960) are listed for a loss; below are several examples: 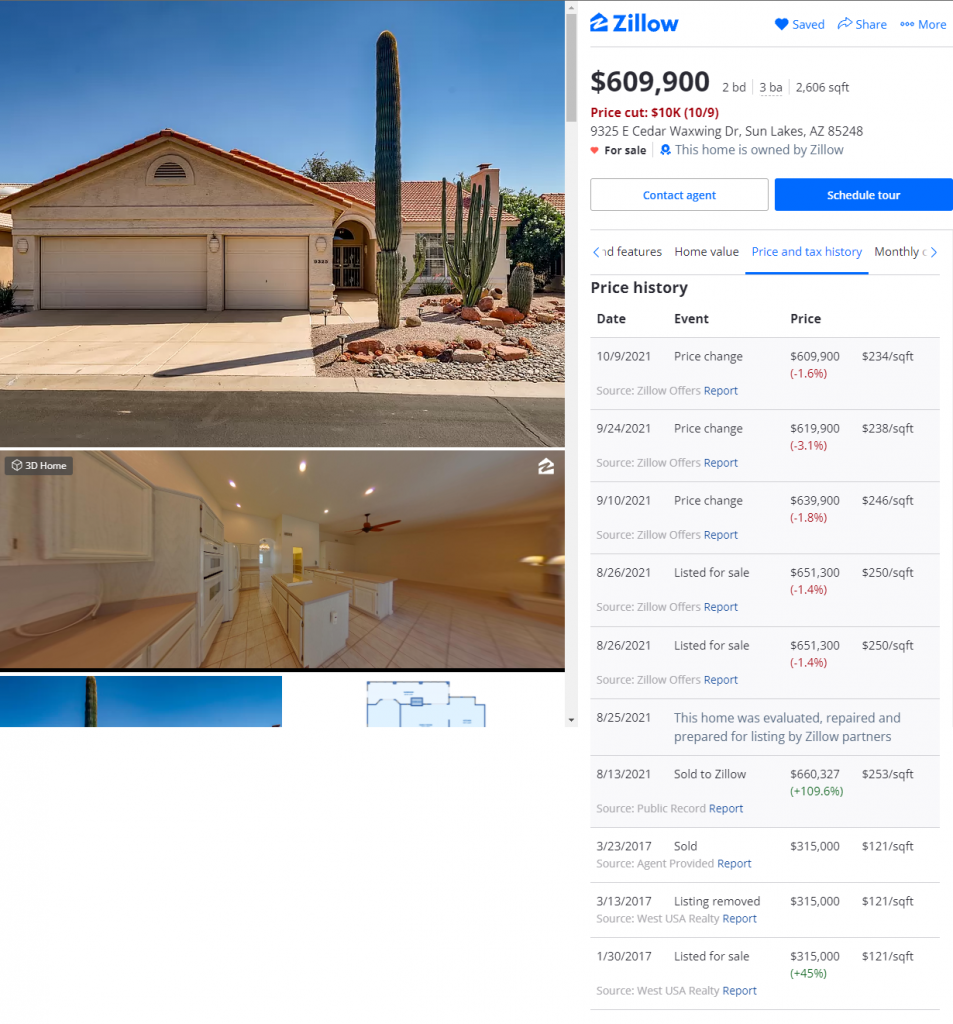 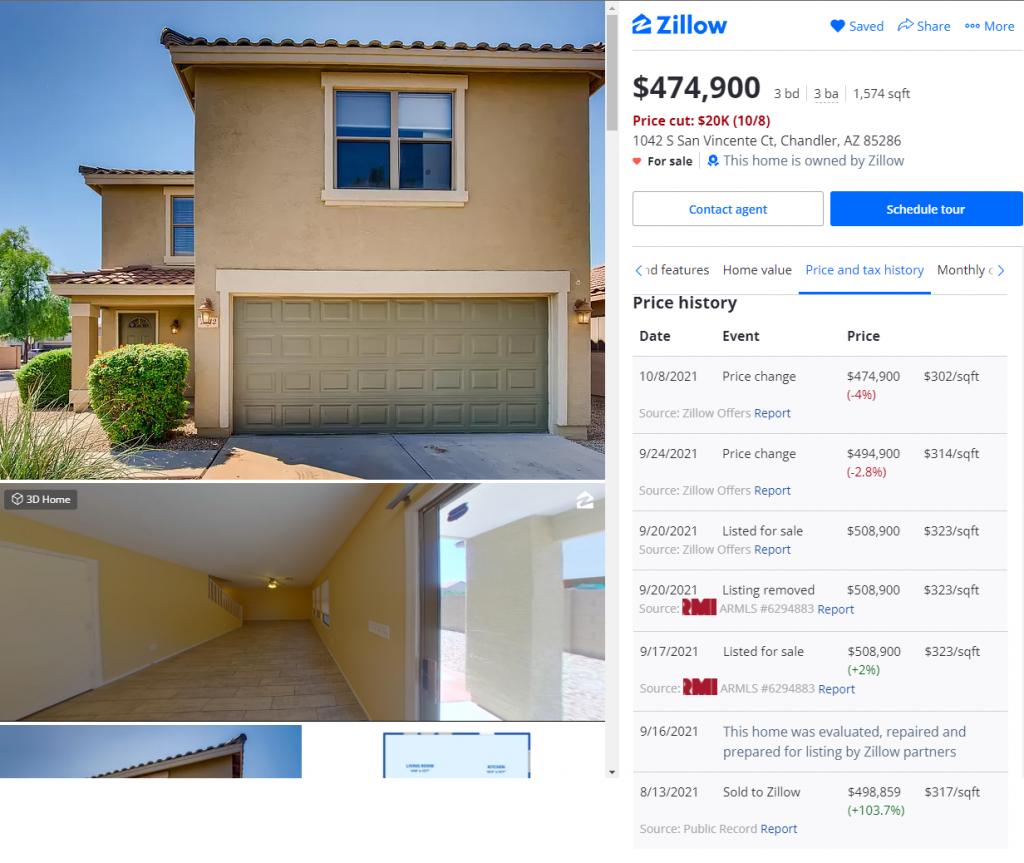 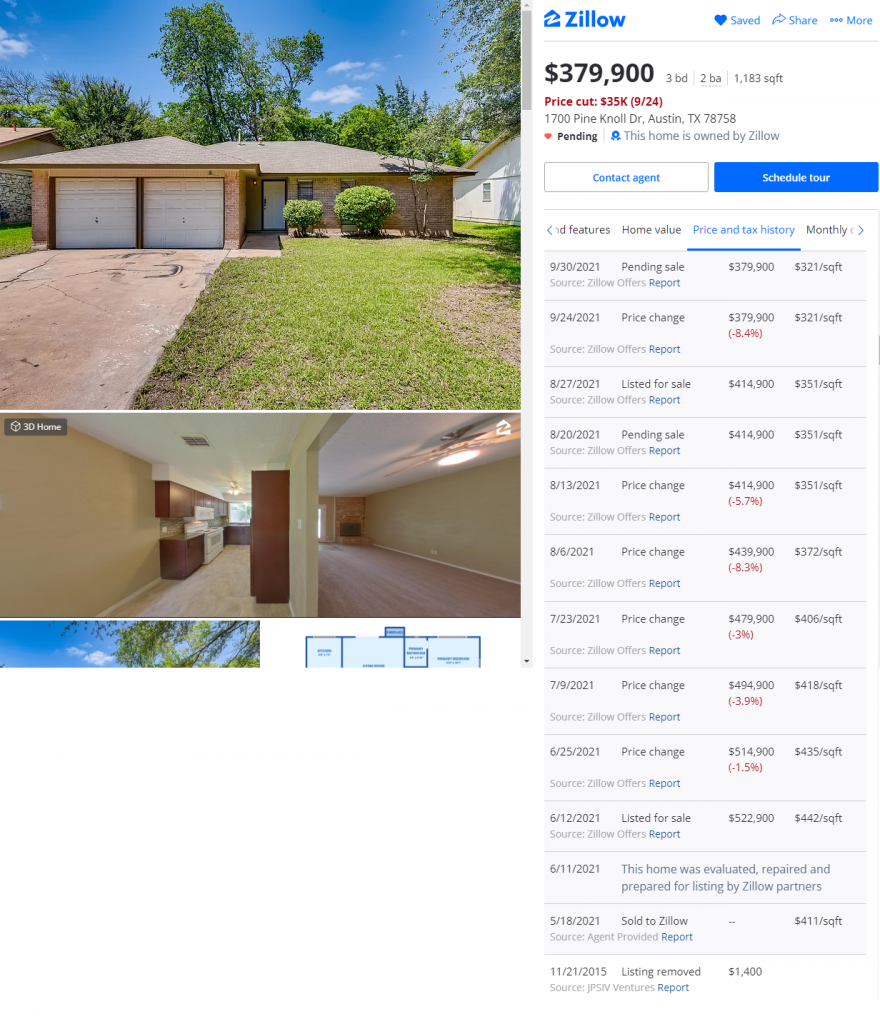 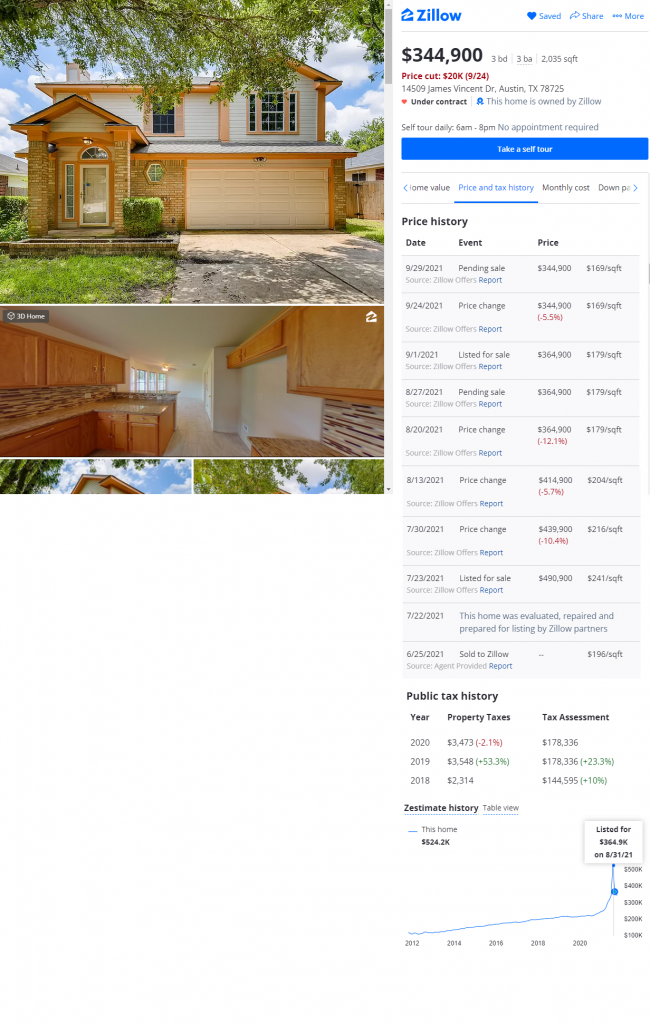 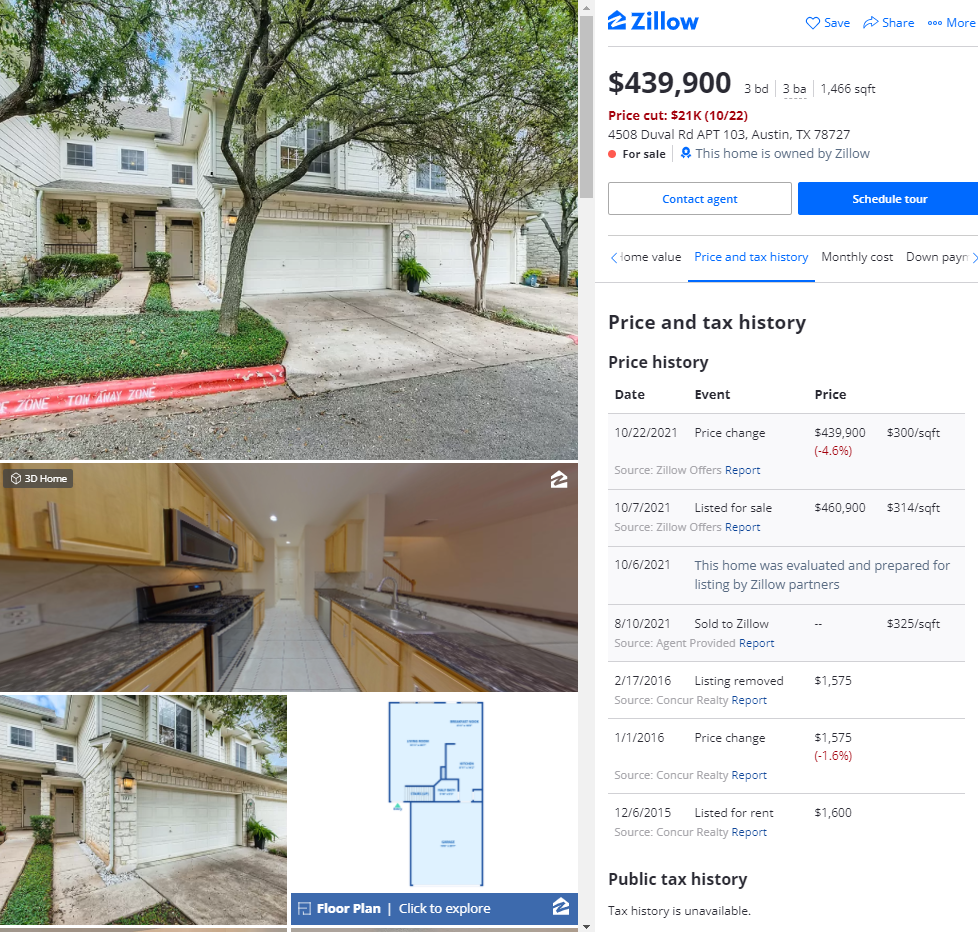 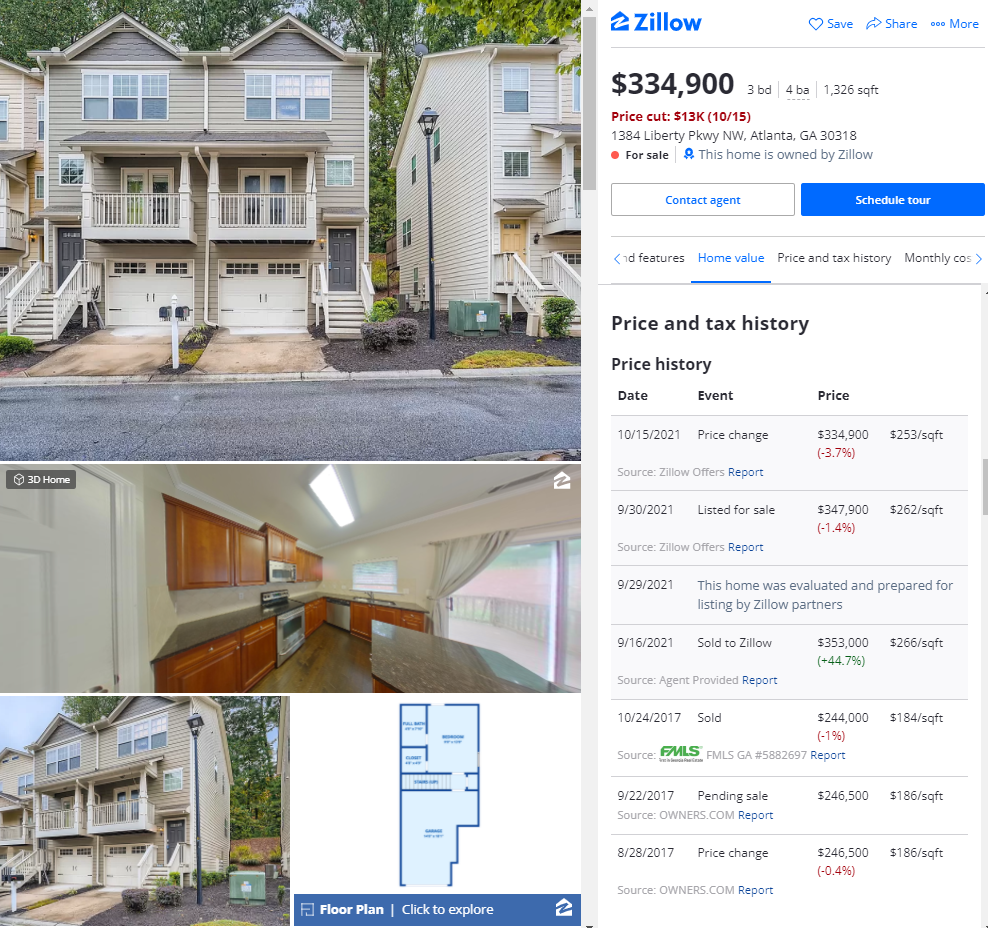 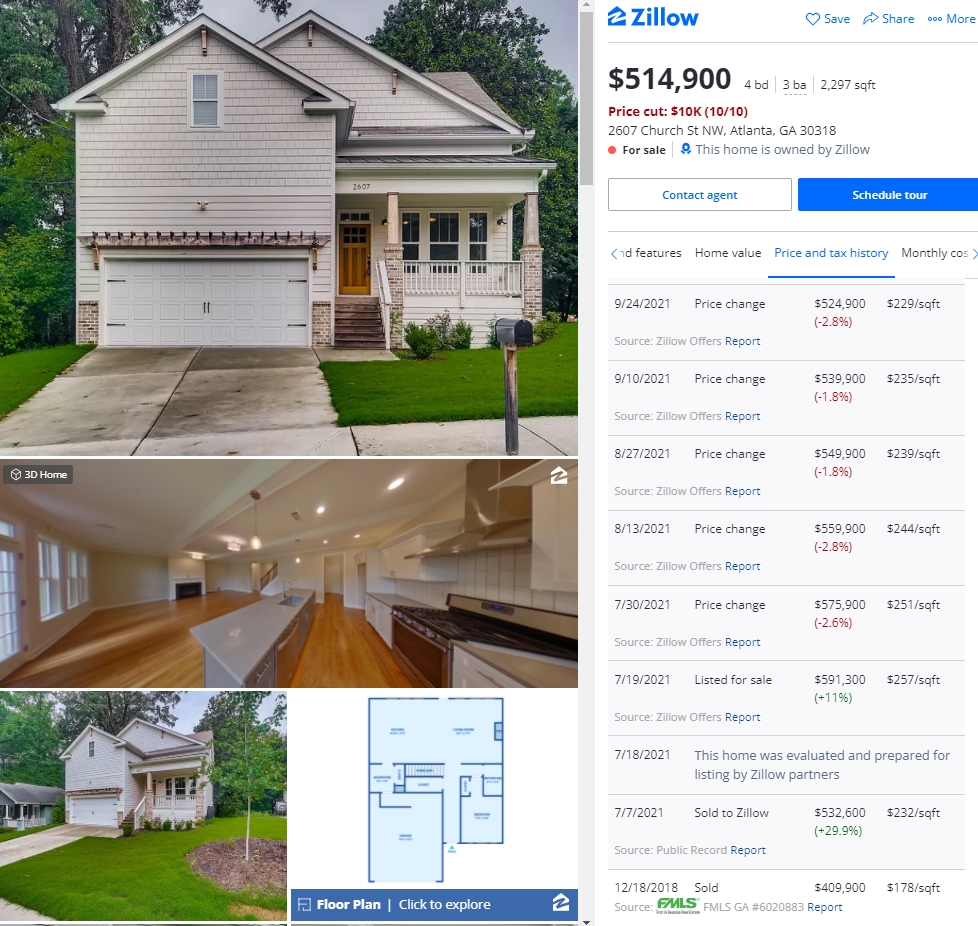 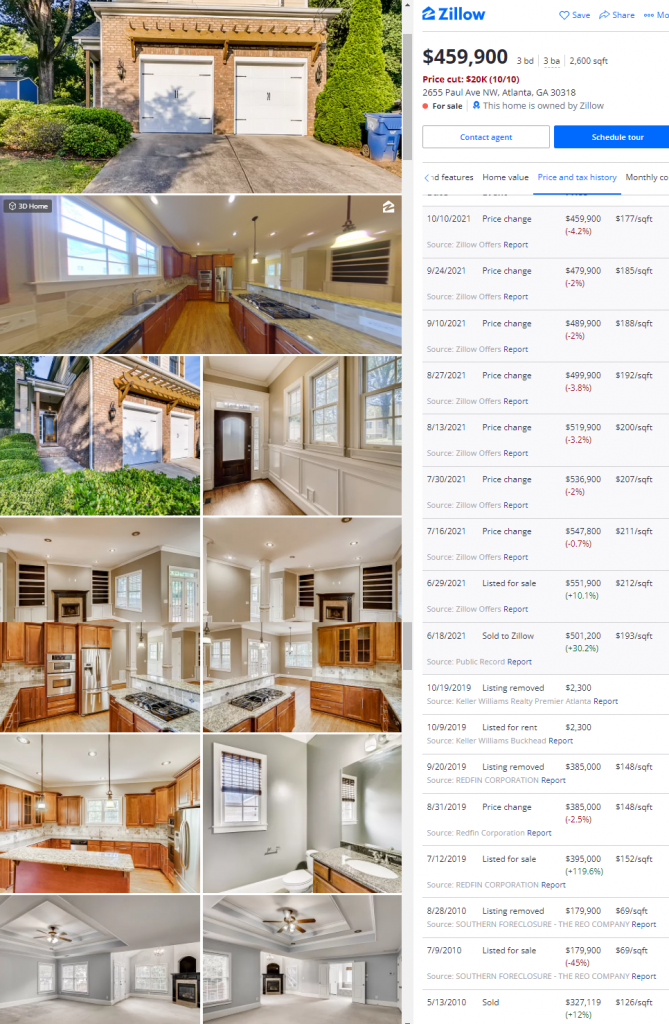 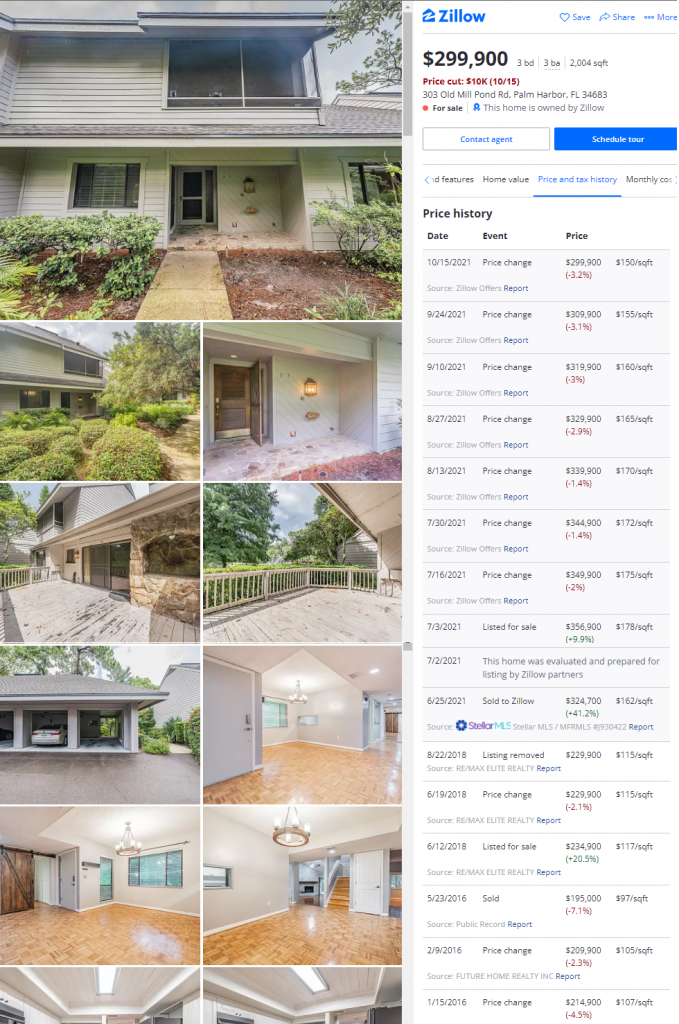 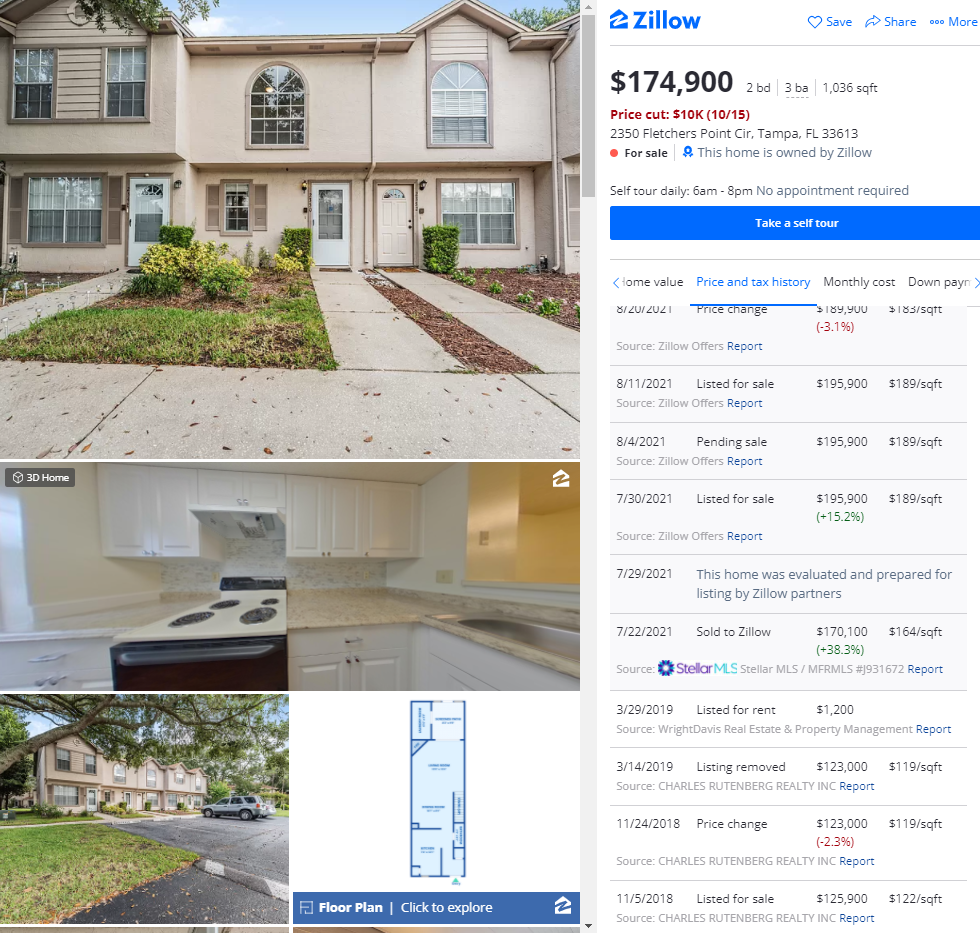 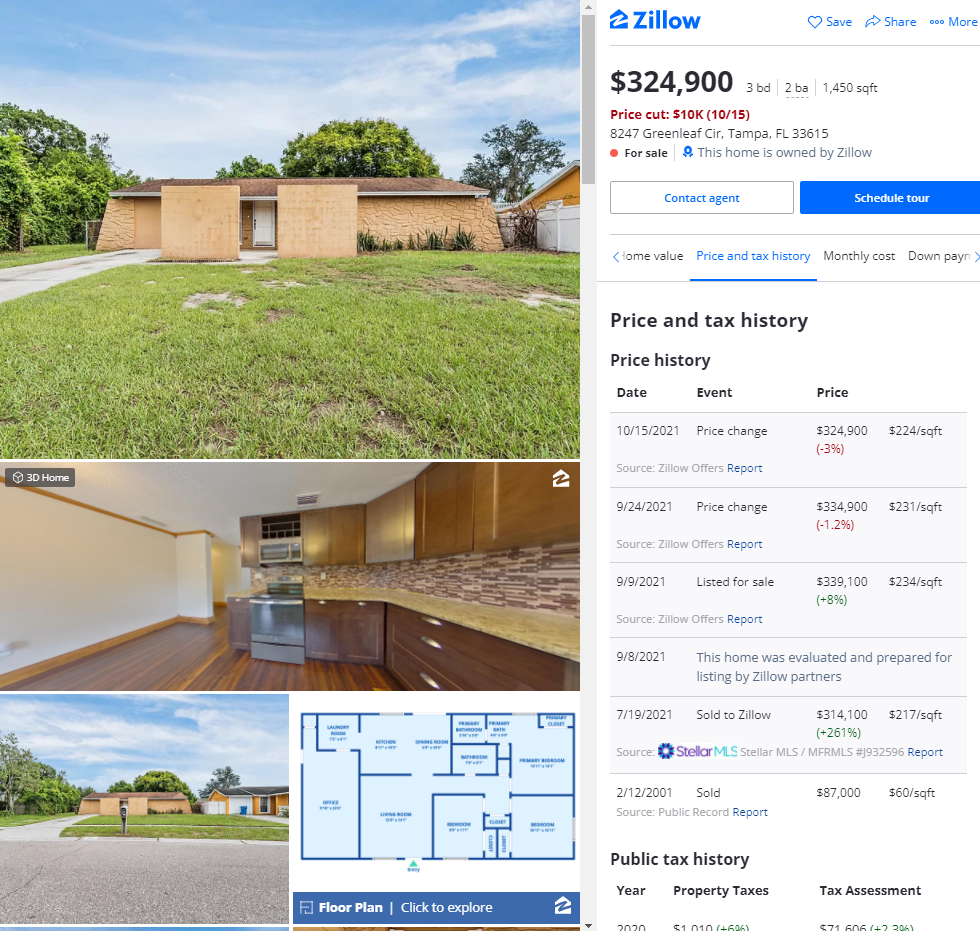 Zillow bought this home in Palm Harbor, Florida for $369,600 just a month ago in September (up 53% from most recent listing price in 2016). It is already marked down $6k from list price. 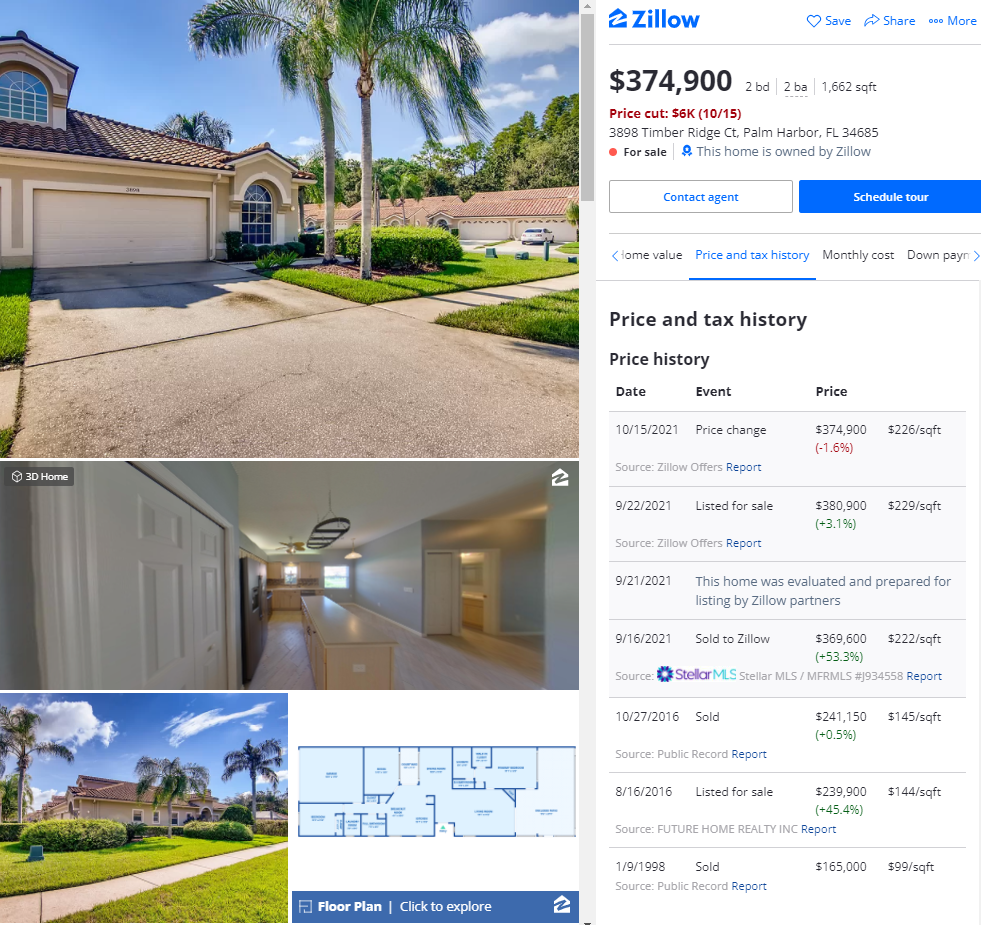 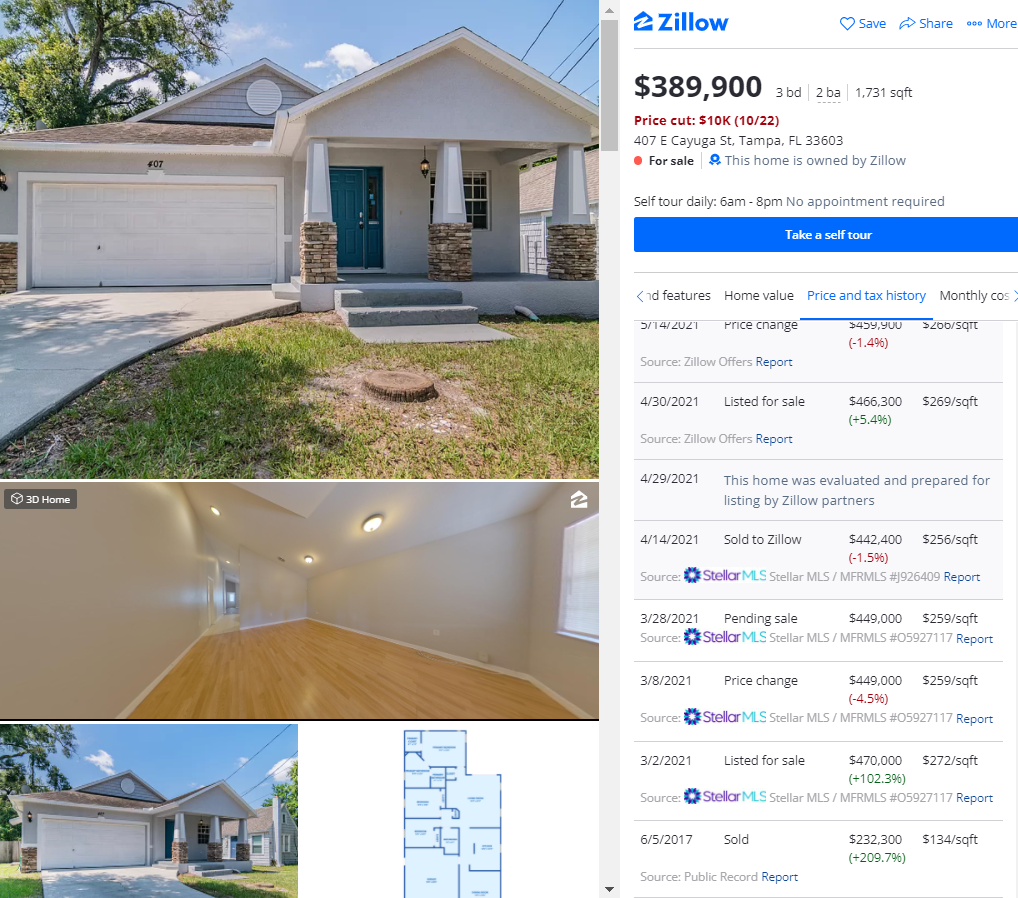 Why did Zillow start buying houses?

As mentioned earlier, iBuying was a perceived as an “existential threat” to Zillow’s incumbency as the first place consumers go when they’re buying or selling a home. Newer competitors were the impetus for change: OpenDoor launched in 2014 with iBuying as its core offering, followed by OfferPad in 2015. RedFin, meanwhile, had started experimenting with iBuying in 2017.

How about Opendoor & Blackrock?

As mentioned earlier, the iBuying market was pioneered by names like OpenDoor. In fact, Zillow was even called out by former cofounder of Opendoor, Keith Rabois, who claimed they would “bankrupt quickly” if they continued to purchase homes at their “Zestimate” price.

In late December of 2020, OpenDoor raised a massive $400M Post-IPO equity round from Blackrock and some pension funds, welcoming an ex-Blackrock executive as their Chief Investment Officer a couple months prior.

To quote their supporters over at the Atlantic, BlackRock owns “only” 80,000 single-family homes of the total 15M rentals in the US. That figure is represented to be a “small fraction”, but in reality represents over one-quarter of total institutional ownership, constituting 1 in every 200 houses. The question is whether that’s enough to sway housing prices.

How did OpenDoor start?

Opendoor was founded on the premise of offering homeowners cash offers on their homes within 24 hours after submitting an offer request on the company’s website. The company began operations in May 2014 following a $9.95m venture capital round led by Khosla Ventures. As of 2018, Opendoor had raised $400m in funding from the SoftBank Group Vision Fund.

About the OpenDoor Deck

The reality is that both of these multi-billion-dollar public companies (Zillow and Opendoor) started with a humble pitch deck and investor presentation to secure the necessary capital to make their success possible.

If you’re an entrepreneur in the real estate space, you may be wondering how to design a successful pitch deck for your startup — if you’re building a new real estate company, you might be interested in our popular Real Estate Pitch Deck template. Alternatively, you’ll probably at least want to read through our free guide: check out our article on how-to create a real estate pitch deck here. →

So what’s the conclusion?

Here’s what we know are facts:

This could potentially be a foreboding sign not only for the future of Zillow Offers, but the iBuying space as a whole.