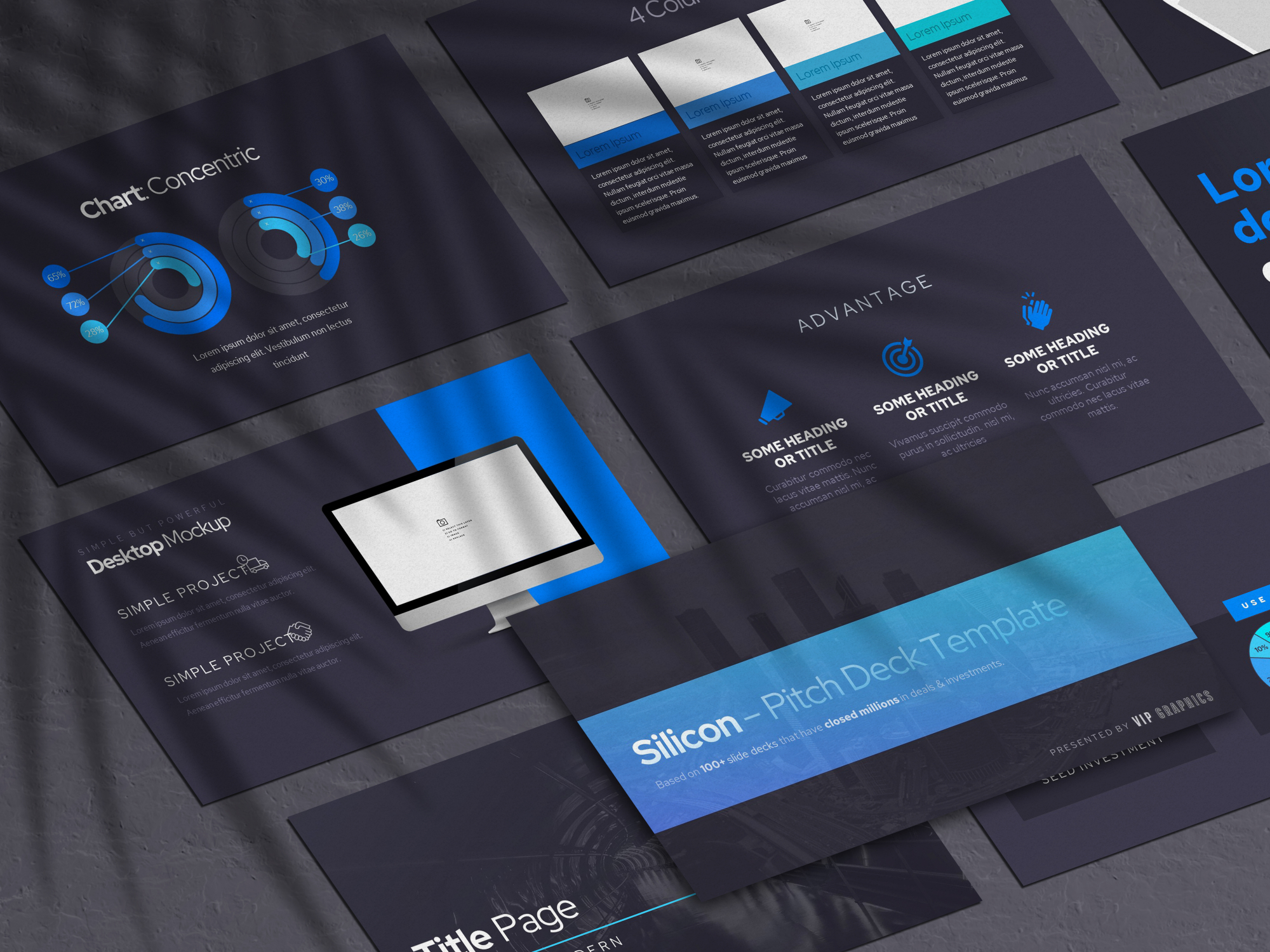 What is a pitch deck?

A pitch deck serves as your company’s first impression to potential investors, and so it should be considered one of the most important startup documents that you’ll need to create. A well-crafted pitch deck is an essential part of fundraising, as it will help you inspire potential investors to support your business. Moreover, a good pitch deck can position you positively when speaking with them. Here are 7 templates you can refer to as a good starting point in crafting your own pitch deck.

A strong deck will help you make a great impression and attract more investors. It might also be the difference that leads you to millions of dollars in investment, or keeps your investors away from your startup. Pitching your business will be easier if you have the right tools. That’s why we’ve created this ultimate list of templates for your pitch deck. Each template is ready to use with a practical, versatile set of layouts.

What should be in a pitch deck?

A well-crafted pitch deck will provide a succinct and complete overview of your business. Below are the questions every successful pitch deck should answer:

What are the best examples of pitch deck?

Looking for pitch decks that helped raise millions of dollars? Take a look at these legendary examples.

You’re an entrepreneur with a great idea seeking capital. You want to find a VC to invest in your company but you’re not sure how to write the perfect pitch deck. Look no further. This list has 20+ pitch decks from household names like Airbnb, Dropbox, Uber, and Tinder — but you can explore nearly 400+ example decks here. These decks are perfect for learning more about what makes an effective pitch deck and how to create your own. When pitching your company to an investor, the deck you present is a vital part of the conversation. Use these 20+ legendary pitch decks as inspiration when crafting your investor presentation.

Perhaps the most popularly referenced and emulated decks of all time, the Airbnb deck has set the standard for thousands of startups since! Today, Airbnb is one of the most valuable private startups in the US, and a trusted community marketplace for people to list, discover, and book unique accommodations around the world. Airbnb connects people to unique travel experiences with thousands of listings in 34,000 cities and 192 countries — but it all started with this pitch deck.

From the beginning, Airbnb has been a simple marketplace. It’s a great solution for hosts who want to make extra money by renting out their homes and for guests who are looking for an authentic local experience. Airbnb was born from the recognition that millions of people around the world enjoy traveling but have great trouble finding quality local accommodations. Their pitch deck exemplified how to present such a market opportunity & demand for the solution in a simple and visual manner.

The Airbnb deck is a timeless classic in the world of startups (and no surprise, considering the founders are designers); we couldn’t resist taking a fresh pass at reimagining the slides with our most popular templates! Follow along with the pitch teardown here, or download the template below for your own use.

Joel Gascoigne and Leo Widrich founded Buffer in 2010, and it grown into a leader in the social media marketing management niche, crossing over 700,000 users a month just before 2020. The story of Buffer began when founder Joel Gascoigne sought to share content more frequently two his Twitter and ended up building the solution that is Buffer today. The founder generously shared the pitch deck they used to raise half a million dollars from Angel investors, seen above.

Carvana is a budding e-commerce giant poised promising to disrupt an antiquated market with a touchless delivery process, nationwide inventory, no haggle pricing, a transaction process that can be completed within 10 minutes.

The company already seems to be well on its way to achieving that lofty goal: Carvana has confirmed that it has already acquired roughly $1.6 billion in financing, and management stated that it is confident that funding will reach a value of $2 billion once the company begins a follow-on funding round later in 2019.

The below sample pitch deck was used to secure $101 million of debt and equity funding in the first round of financing from a group of investors. The company has raised capital multiple times since then, including two rounds that were led by Daimler and GGV Capital in 2017.

Moz was founded by Rand Fishkin and Gillian Muessig in 2004, and was at first called SEOmoz. The company started as a blog and an online community where some of the world’s first SEO experts shared their research and ideas. Moz launched the Beginner’s Guide to SEO and their first Search Ranking Factors study, and that hub of industry expertise transformed into a small consulting firm and which led them to create some of their first SEO tools.

After a glimpse of the demand, Moz shifted focus from consulting to software, taking their first round of funding in 2007 to power the development of new tools and ideas. By 2009, te company had grown to their first 5,000 subscribers — and the rest is history!

WeWork provides a simple way for small businesses and startups to get together and work to their full potential, no matter where they are. WeWork offers access to a variety of workspaces from hot desks to fixed term leases including a community of people sharing your same values and goals.

In 2010, WeWork was founded by Adam Neumann and Miguel McKelvey, who met while studying at the Wharton School of the University of Pennsylvania. They wanted to create a space where people could come together to work and be more productive, whilst enjoying a premium experience. In 2012 the company launched their first location in New York with only four desks and ten members. Since then the company has expanded rapidly into 150 locations in ten different countries. WeWork is now valued at 26 billion dollars and has more than 2 million members globally.

Crunchbase is a platform for finding business information about public and private companies. Investors, companies, founders, and leaders can all be found on Crunchbase, as well as news, mergers and acquisitions, and industry trends.

The team at Crunchbase used this pitch deck to raise $30 million from OMERS Ventures, as well as existing investors, Emergence, Mayfield, Cowboy Ventures, and Verizon. In the spirit of their mission to help innovators find new opportunities, Crunchbase shared their own Series C pitch deck.

Arash Ferdowsi and Drew Houston founded Dropbox in 2007 as a cloud-based file sharing and storing solution. Dropbox didn’t disclose the amount they raised, but their pitch deck is of great value for any entrepreneur looking to improve their presentation.

Dropbox makes it easier for people to collaborate. Over 500 million users across the globe use Dropbox to work wherever, whenever, and however they choose, and over 150,000 businesses rely on Dropbox Business. To date, Dropbox has raised more than $1.7B in funding from prominent investors such as JP Morgan, Index Ventures, and Sequoia Capital.


Tinder’s origins, fundraising history, or early cap table are largely unknown. In February 2012, Sean Rad and Joe Munoz met at a hackathon and developed the first version of the app, then called “Match Box.” By 2014, Tinder users were swiping more than a billion times a day. Tinder allows users to connect with nearby people who like each other if both of them are interested.

There were only three rounds of funding for Tinder before its popularity soared to record levels. The deck referenced above appears to be a “Match Box”-era document, which means it is extremely early-stage: there is no official connection between this pitch deck and any particular funding round.

Front launched in 2016 with a bang graduating from Y Combinator with financial backing from Stewart Butterfield, the founder of Flickr and Slack (current CEO).

Front is a customer communication platform that seamlessly integrates email, apps, and teammates into a single view. Think of Front as a service to collaborate, comment, assign and reply to those pesky emails that you receive on your support@, jobs@ or contact@ email addresses. In the years since, Front has grown to be a leader in customer communication, empowering teams to offer tailor-made service at scale.

Intercom is a SaaS startup that helps other companies talk to their customers online. Since its foundation in 2011 with this seed funding deck that raised $600k, Intercom has gone one to riase over $100 million in funding from top-tier investors including Accel, Andreessen Horowitz, and Index Ventures. It is a leader in the marketing communication technology space, featured in The New York Times, The Wall Street Journal, TechCrunch, and more. The company offers free product for small teams and a paid product for larger teams.

Reid Hoffman, LinkedIn’s co-founder, created the company in his living room in 2002. LinkedIn began upgrading its service by 2005: with the launch of jobs and subscription fee options, the number of users had increased rapidly by 3.3 million users by the start of the year. Most readers are probably familiar with LinkedIn’s explosive growth in the decade since.

In June of 2016, the company was acquired for a headline-grabbing sum of $26 billion by none other than Microsoft.

Mixpanel is an analytics platform that focuses on measurement via firing events: it’s great for segmentation of online audiences. It tracks user interactions with web and mobile applications and provides tools for targeted communication such as in-app A/B tests and user survey forms. The company was founded by Suhail Doshi and Tim Trefren in 2009 and backed by Y Combinator before picking up a notable list of investors including Andreessen Horowitz and Max Levchin.

It was ten years ago when a company called UberCab launched a service that made hailing a vehicle easy using your smartphone. The idea for Uber came about during a winter night during the LeWeb conference in 2008, when Travis Kalanick and Garrett Camp struggled to get a cab. The idea was simple: tap a button, get a ride. Known now simply as Uber, the company has spread like wildfire around the world since then.

After raising $24.7B in total, over 25 funding rounds, Uber went public on the NYSE recently in what was a much-watched IPO. If there’s anyone who knows how to raise money, it’s Uber. Since it was founded in 2009, Uber has transformed the ride-share industry and become one of the most valuable companies in the world.

From Tinder to Uber, all the greatest startups in the world started with a humble idea and a simple 10 – 15 slide deck that helped closed the critical initial investment that made all their success possible. As you begin your own journey & honing your own pitch deck, you may want to rely on our database of 390+ examples of winning pitches &/or our expert-designed templates.