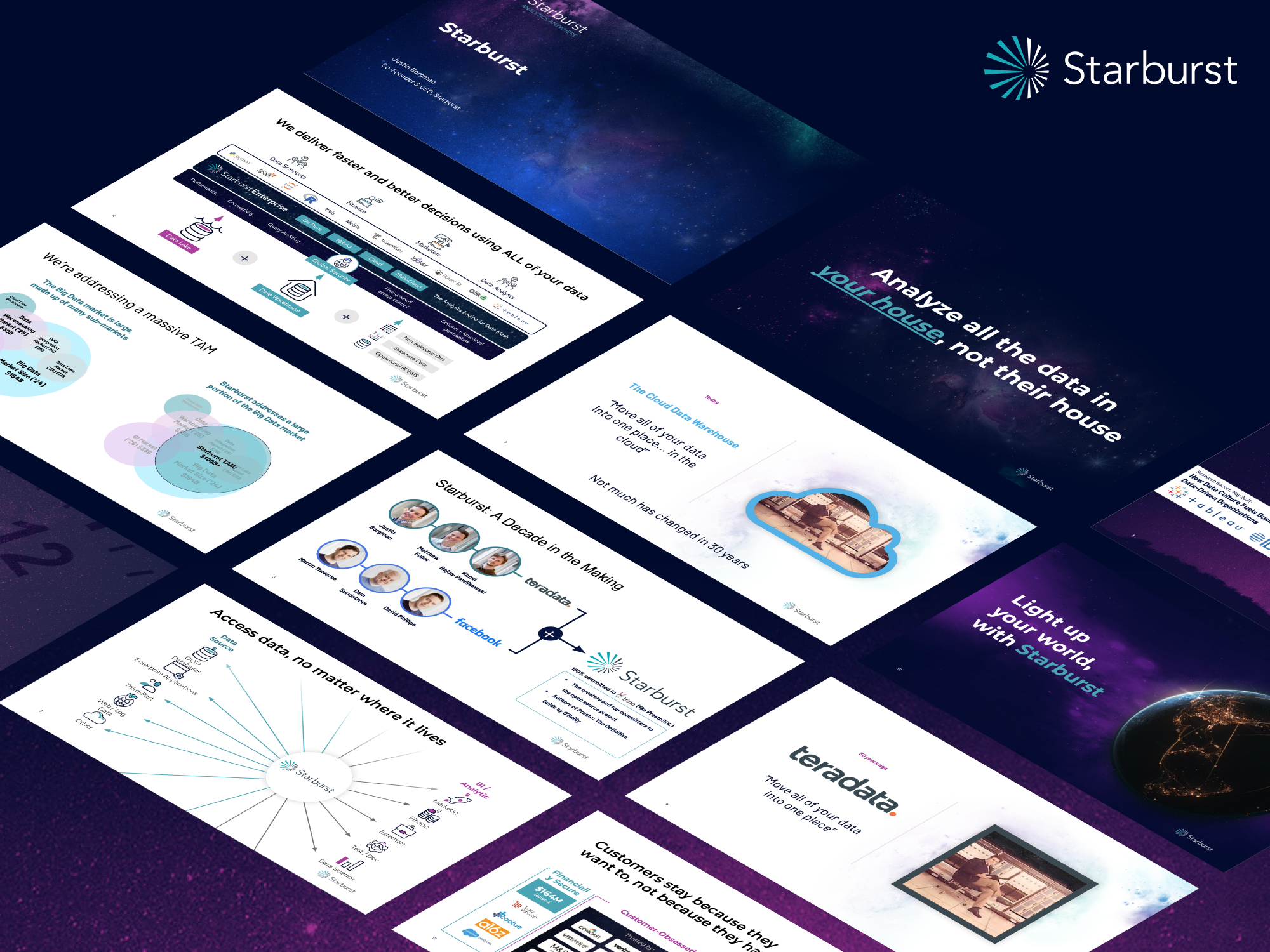 In 2022 and beyond, digital privacy, data analytics and decentralization are shaping up to be major tech wars. In the wake of cloud-based data warehouser Snowflake’s massively successful IPO in September 2020 (with a market cap of $88bn), big data analytics startups have drawn in huge sums of cash in the form of late-stage investments. Snowflake competitor and unicorn startup Starburst just pulled in $250M, nearly tripling its valuation from the previous round (from $1.2B to $3.35B).

Starburst is betting on a decentralized future of big data and pursuing an unconventional view in the burgeoning data industry, which is currently dominated by the cloud data behemoth Snowflake. Justin Borgman, CEO and co-founder of Starburst, believes the company can succeed by developing solutions based on the premise that data will increasingly be decentralized and accessible across a corporation in the future. This approach, known as data mesh, is a radical departure from the traditional, centralized data warehouse approach. Starburst promises the ability to run analytics on data from a variety of sources simultaneously, without needing to extract or transform data so it can be loaded into a single destination data warehouse.

Investors seem to agree: Starburst announced it has raised $250 million from Alkeon Capital, nearly tripling its valuation to $3.35 billion.

Let’s take a look at the pitch deck that helped Starburst raise a quarter-billion dollars for big data analytics:

What were the slides in the Starburst pitch deck?

Browse the exact example slides from the pitch deck that Starburst used to secure $250 million from Alkeon Capital.

The title slide of a pitch deck is often overlooked but is one of the most important slides. The cover of your pitch deck is your first impression — so make it count. That said, it doesn’t have to be complicated: the opening slide of most pitch decks typically feature the company name, a memorable tagline, and, in some cases, the name of the presenter. A well-designed cover slide should reflect the startup’s identity, which the Starburst pitch deck exemplifies: 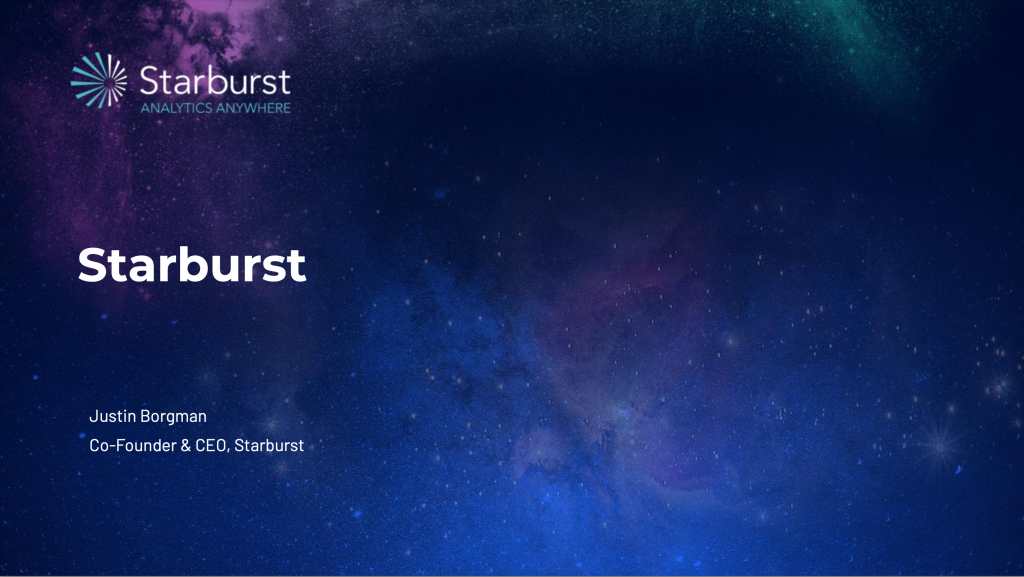 Starburst establishes the galaxy theme motif that is used throughout the pitch deck, and even on their Starburst website — alluding their far-reaching goals & technology. They also chose to relocate their slogan to the next slide, in order to place a greater emphasis on their vision. 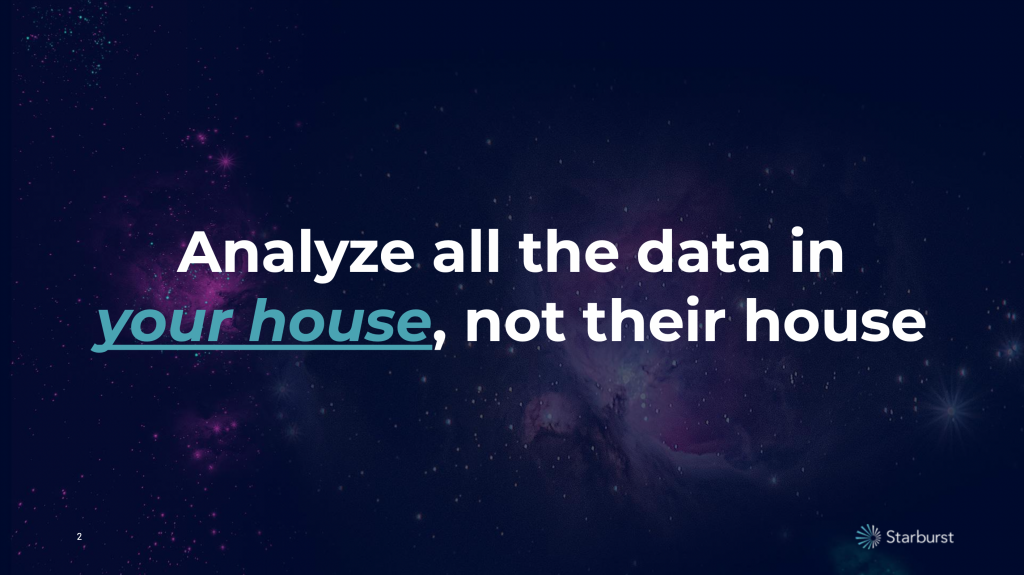 For investors, market size and potential are critical because most investment firms operate under power laws: their success is determined by just one (or a few) billion-dollar success among countless less-notable portfolio companies. As such, investors tend to value a large addressable market just as much as a strong team and a product that scale quickly and effectively. Additionally, the market slide should describe how your company is positioned for growth and how it compares to existing competitor landscape.

Starburst’s market slide uses a bubble chart to convey several key takeaways: not only showcasing the relative sizes of the various markets they serve, but also how these demand segments are related &/or overlap. 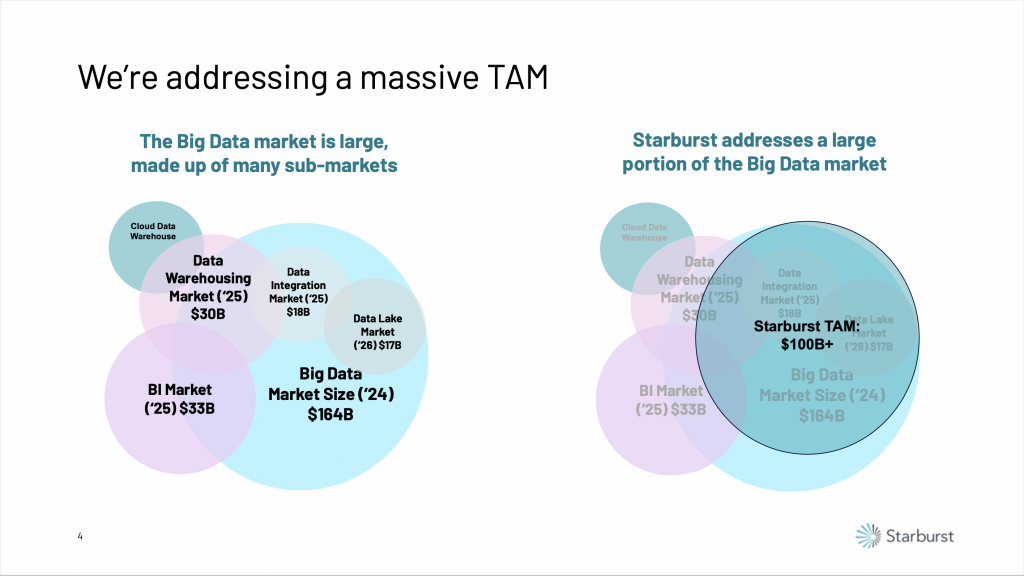 Investors need to know that the people at the helm have the subject-matter expertise and business experience to successfully execute on the aforementioned market opportunity. The people in charge of the startup will be the difference-makers who steer it to success in the face of incumbent competitors, market shifts, and Black Swans. Whereas angel investors and accelerators are largely investing in the founders of the company (as opposed to the product, given early-stage startups are prone to pivot), VC firms vetting later-stage investments (such as Starburst) seek a seasoned management team with past success scaling large companies in adjacent industries.

Although important, team slides don’t need to have any complicated design — most are composed of the same key elements: names, titles, bios, and experience. This is exactly what we find in Starburst’s team slide, which features marquee logos to build ethos: 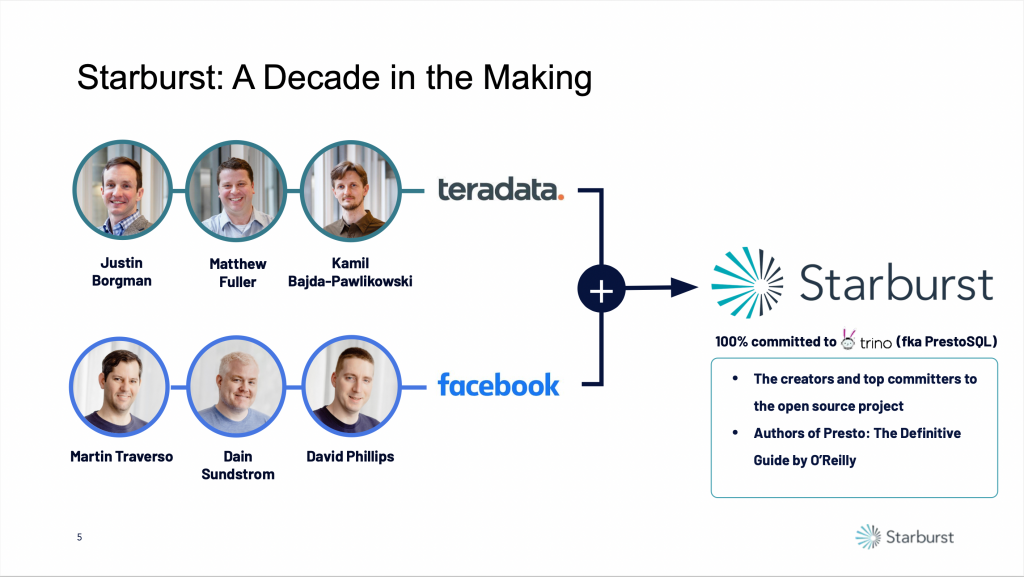 Hopefully, this was an insightful read for you, and it will inspire you to create your own pitch deck. If you’d like to, you can bookmark it at bestpitchdeck.com/starburst

It may be suggested that, aside from their pitch deck, having a business strategy that respects the changes in the technology sector was vital to their funding round success; yet, it is critical for any startup to ensure that their vision is appropriately expressed. That’s where crafting the perfect pitch deck comes essential:

Every pitch requires a unique approach tailored to its audience. Our team of experts have created pitch decks for different industries, as well as funding stages:

Silicon Pitch Deck Template — You might be interested in the popular Silicon Pitch Deck Template designed by our team at VIP.graphics: cutting-edge slides based on decks that closed millions in deals & investments for orgs of all sizes: from high-growth startups to Fortune 100 corporations. Super simple to customize in PowerPoint or Keynote, this template offers you ready-made elements & all the essential slides to help your business stand out 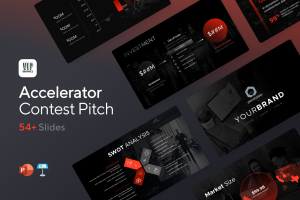 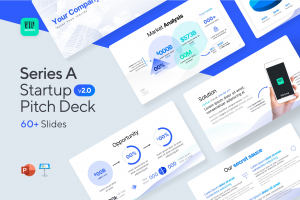 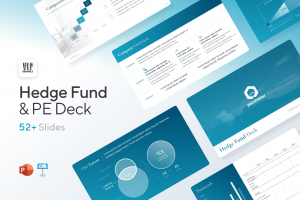